Home Articles A Book Review of “Let The Nations Be Glad!” 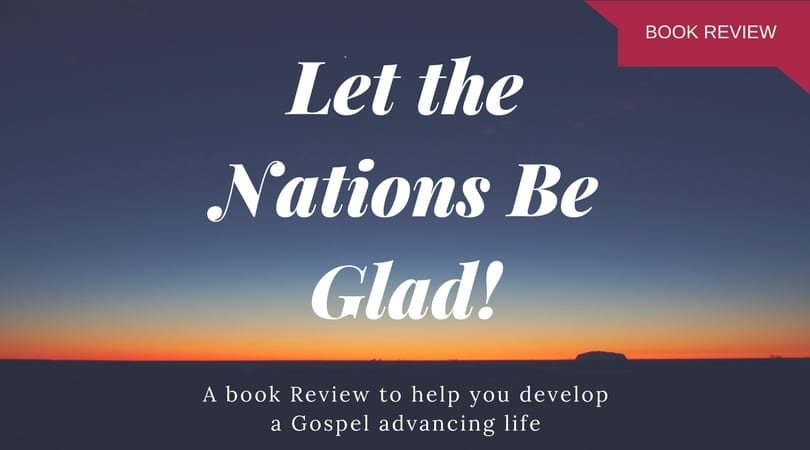 Where do I find the material helpful, confusing, or frustrating?

At a young age, I was exposed to missions. I grew up in a church that was passionately sending people all over the world to do God’s work in foreign places. That same church is now the very church I pastor. Over the years our missions program has often lacked depth for those who were not going, but merely sending missionaries. The people of the church were nothing more than the people who were senders and hearers; we prayerfully and financially sent people, and then we would sit to hear them report on what they experienced. While the role of the sender is important, we must never reduce missions to someone else’s job; rather it must be the participatory work of every believer. In Let the Nations Be Glad! by John Piper, we hear the desperate call for all believers to return to a “God-entranced vision of all things” and see their role in missions as God’s sovereign design for advancing His Kingdom on earth. I found Piper’s work to be extremely empowering and mobilizing to me as a believer and a pastor. From the very beginning pages, I was motivated to help my own heart and the hearts of those I serve in the church to embrace a call to reach the nations. On the first line of his book, Piper states, “My passion is to see people, churches, mission agencies, and social ministries become God-centered, Christ-exalting, Spirit-powered, Bible-saturated, missions-mobilizing, soul-winning and justice-pursuing” (p. 9). At Grace Chapel, we are committed to living out the Gospel of Jesus locally and globally. It is vital that we involve ourselves in the Christ-exalting and prayer-dependent work of missions. Piper’s book was extremely helpful to show how the center of our worship, prayer, and suffering is the purpose, power and call in missions for those who have gone before and those who are here now.

There was little that was frustrating or confusing about this work. I found the stories to be inspirational and relevant to the material. I will never forget the story of the “Man with Blistered Feet” (p. 115) or the story of Henry Martyn (pp. 93-94) and the many others, new and old, captured within the pages. In Piper’s style, he takes the missionaries and evangelists who have since passed from this world, such as William Carey, David Brainerd, and John Dawson, and brings them to life. The concluding section of Jonathan Edwards work was inspiring and full of application, and it made real the idea of expressing God’s supremacy for the whole world. If there were any suggestion I could give to this work, it would be to share some more stories that may apply to the average lay-person in the church to balance out the extreme stories of missionary sacrifice and victory.

What light does the material shed on your own experience, and vice versa?

As a pastor, preacher and evangelist myself, they most helpful part of this book was Piper’s work to unpack the spiritual mandate for us to go and preach so that people may hear the good news—“Preaching Christ to all is utterly important” (p. 137). Chapter four provides a more thorough underpinning for the weight of the calling upon my life. Missions is more than just sharing about Christ and evangelizing for the sake of converts. It is a profound and necessary call for humans to hear about a God who has created a path for their salvation. Piper’s efforts to exegete Romans passages, among other Scriptures, was authoritative and impactful. I was deeply convicted by the reality of hell and the eternal consequence of torment for those who do not believe in Jesus Christ (p. 138).

From my experience in the reformed church, I believe we hold God’s sovereignty so high that we often lose some urgency to share the Gospel with those headed toward hell. To dispel the notion that missions is not needed for God’s salvation to be brought to men, Piper wrote, “The more likely [we believe] it is that people can be saved without missions, the less urgency there is for missions” (p. 137). I agree that if we are too quick to sit back on our theological haunches and not move our knowledge into action, we will miss the urgency of reaching the nations. We must agree with the author when he says, “It is our unspeakable privilege to be caught up with Him in the greatest movement in history—the ingathering of the elect “from all tribes and languages and people of all nations” (p. 176).

Where do you feel yourself being challenged?

The greatest area I feel challenged by Let the Nations be Glad! is to communicate this message of urgency and centrality of God’s supremacy with my church. The first section of this book was personally and professionally moving for me. I felt a deep conviction to teach the centrality of missions in worship, prayer, and suffering to our people. I resolved after reading this book that I will lead my staff through these first three chapters so that we can better understand the purpose, power, and price that comes with reaching people for Christ.

I also see a need for me to use the weekly pulpit ministry as a means of teaching our congregation the necessity of missions for our church. It would be my desire to have all of them understand that missions is not just something for those guys—the missionaries, but is something for all of us to partake. Though I had heard this before, it was great to grasp this truth again: “Missions exists because worship does not…Worship, therefore, is the goal of missions” (p. 17).

Read this book! It is a great work and worth your time. It will challenge you to think beyond your own world and have a heart for the nations. It moved me from wanting to be Gospel-centered to Gospel-advancing.

Every Christian is Called to Care for Others: Generously and Selflessly