Home Articles Day 9: The Final Steps of Christ in Jerusalem 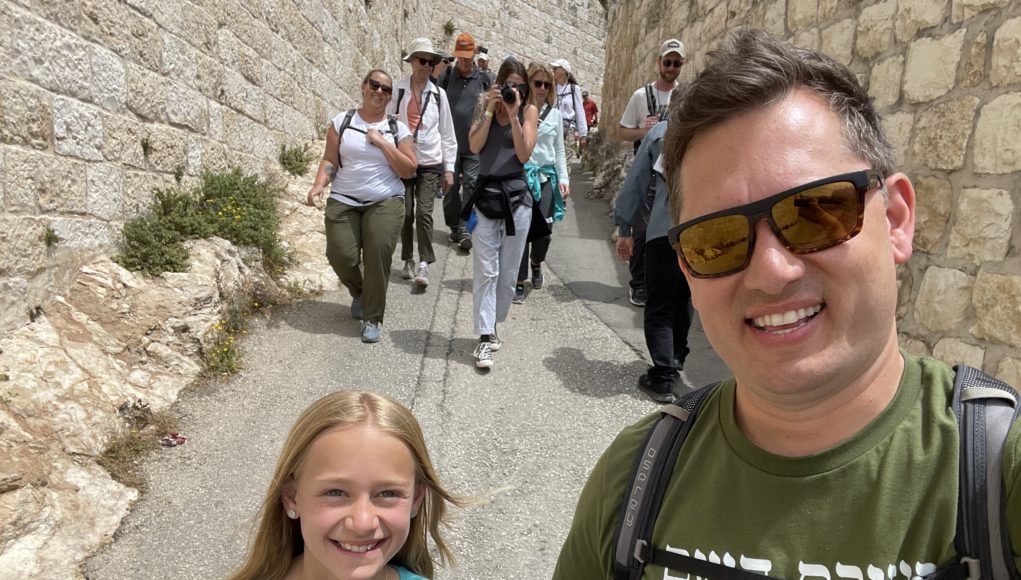 Probably the most recognizable site in the world is Temple Mount, The Dome of the Rock. The significance of Temple Mount dates back to the time of Abraham, where he took his son Isaac to be a sacrifice on Mount Moriah. Later on Solomon built the first temple to God on this “mount” where all Jews would go during festivals each year in order to offer their sacrifices. After Solomon’s temple was destroyed Herod the Great built the second temple, believed to be twice the size of the first. To this day you can see parts of the walls that would have been in Solomon’s time as well as Herod’s. Temple Mount has significance to both Jews and Muslims. The “Western Wall” can be seen both above ground and below in the Rabbinic Tunnels. Some of the stones making up the wall are as large as 10 feet high by 45 feet long. The sheer size of these stones boggles the mind in how they were able to construct such an architectural feat in their day. Jews are not allowed to pray on Temple Mount which is why the “Western Wall” is so well known and shown where Jews (and others) go to pray. Many people even write their prayers on little pieces of paper and place them in the cracks of the stones along the Western Wall.

The “old city” of Jerusalem or the portion within the walls is broken up into four quarters; Jewish, Muslim, Christian and Armenian. Even with those very different people groups they’ve learned to coexist in an area that truly means a great deal to each one of them.

Here is some of my past teaching in Jerusalem:

Across the Kidron valley from Temple Mount are places that were featured a great deal during Jesus’s time on earth. The Mount of Olives and further down the hill, Gethsemane, were places of sorrow. Even David fled to the Mount of Olives after his son led a revolt against him. (2 Samuel 15:30) People from Jerusalem have been buried on the hill of the Mount for centuries. Some tombs have even been identified as belonging to those back in the time of King Hezekiah. The Garden of Gethsemane, at the foot of the mountains, was an olive tree garden and press. They likely got the oil from this grove for use in the temples. During Jesus’s final hours He went to Gethsemane to pray, where He asked  the Lord, “My Father, if it is possible, may this cup be taken from me. Yet not as I will, but as you will.” (Matthew 26:38-39) This was also the place where Christ was “betrayed into the hands of sinners.” (Matthew 26:45-46)

Following Jesus’s last hours He’s eventually taken to Golgotha to be crucified. There are two places in Jerusalem where scholars believe that occurred. The Holy Church of the Sepulchre in today’s time is inside the walls of the city, but in Jesus’s time it would have been outside. There are outcroppings of bedrock believed to be 1st century, giving the location credibility. Within the church standing today are heavily ornamented shrines that to some believers seem to be a little excessive. Some distance from the bedrock outcrop believed to be “Calvary” is a tomb, which they have now built a chapel around. Another location not far from the Holy Church of the Sepulchre is the Garden Tomb.  The Garden Tomb is next to an outcrop of rock that takes on the appearance of a skull, which is what Golgotha means, “Place of the Skull.” The “new tomb” that Joseph of Arimathea placed Christ in was described as being near a “garden.” (John 19:41) The Garden Tomb portrays exactly that. It’s an area of beautiful gardens, with a tomb carved out of the rock. Whether Christ died and was laid to rest at the Holy Church of the Sepulchre or at The Garden Tomb, place is not important because Christ rose from the grave and is alive today!

Here is some teaching from a past tour in the Garden of Gethsemene:

While this last day was filled with some unexpected turns, and covid testing to return to the states, we loved our time walking the last steps of Christ in Jerusalem.

Every Christian is Called to Care for Others: Generously and Selflessly